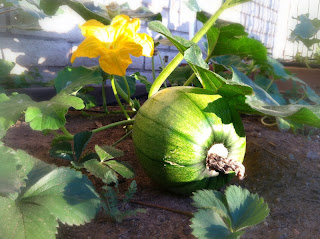 [ this moment ] - A Friday ritual. A single photo - no words - capturing a moment from the week. A simple, special, extraordinary moment. A moment I want to pause, savor and remember. (Homage to Soule Mama)
Posted by Cathleen Cherry at 6:57 AM No comments:

On Top of Fear

I can still recall vividly the exact moment when I developed a fear of heights.  To be honest, it wasn’t a true phobia, but it was enough to cause duress at key moments.  It was late July, 1989, and I was visiting Florence, Italy after spending most of the summer in Paris.  My traveling companion, Missy, and I decided to climb to the top of the Duomo, the marble cathedral that dominates the skyline of Florence.  We climbed worn, dished-out stone steps up the dark, claustrophobic spiral staircases, huffing stale air.  At the halfway point, we emerged at the bottom of the massive dome, still inside the church.


A delicate rail was all that stood between us and the polished, decorated marble floor around the altar.  The domed ceiling swooped above us and we could hear conversations in a handful of languages of those far, far below, wandering in the church.  The acoustics were perfect.  But as we walked along this narrow perch to the next set of staircases, Missy balked.  She wouldn’t go any further, she just couldn’t.  And while I was nervous, I wasn’t scared.  Plus, I rationalized, who knows if I’ll ever make may way back to Florence?  This might be my one and only chance to climb to the top of the Duomo, I thought. - and truth be told, it’s been more than twenty years and Florence isn’t even close to the top of my bucket list.


And so she turned back and I continued up, somewhat annoyed.  I don’t remember the climb after that, but what I do remember is materializing on the top of the dome - in my memory, I surfaced through a small trapdoor, but I have no idea if that is accurate or not now.  Fear, really, doesn’t care about accuracy, only about that visceral response.


I stood alone on top of the Duomo, my eyes tracing the red-tiled curve of the domed roofline that stretched below me, until the arc became so steep that the line vanished.  I couldn’t see the cobblestoned streets or crowds below me, only other red-tiled roofs.  A chain was looped through iron posts defining the area where I was standing.  I inhaled, amazed at the view, snapping some photos and slowly turning 360 degrees to take in the beautiful city where Dante, Michelangelo, and da Vinci had walked, loved, created.


A breeze picked up, tossing my hair and pushing me slightly, and I felt it luring me, taunting my mortality.  Squeezing my eyes shut, I tried to block out the vision of me sliding down the dome, my bones cracking against the cobblestones below, and landing in a tangled heap in front of Ghiberti’s bronze doors to the Baptistry of San Giovanni.  I couldn’t stop this image from replaying, again and again, and no one was there to talk me down.  Shaking, I somehow made it back inside and down to ground level, nearly slipping several times on the slick stone steps, and eventually reuniting with my friend who evidently had more sense than I did.

Years later, this moment still etched perfectly into my memory, I was hiking in Kodachrome Basin, Utah with my husband and his parents.  The trail was narrow, a slim path cutting through a crumbly, disintegrating section of steep badlands.  If I fell, there was nothing to break my fall, no vegetation, no plateau, nothing at all to stop my descent.  Instinctively, I leaned to the inside of the trail, and my fingers brushed against the face of the hill, which crumbled into powder from my mere touch.


And in my head, the vision from the top of the Duomo replayed again and again.  I squatted down, hugging my knees, afraid to go on, afraid to turn back, but then the inner replay changed:  now I saw myself stepping onto a section of trail, which then collapses.  I roll, limbs flailing, down the steeply angled slope, my fall eventually broken by hunks of sandstone the size of houses, my bones snapped and broken.  Of course, none of that happened, I somehow made it down, with lots of coaxing from my patient husband.  Some years later, I was vindicated when that trail was deemed unsafe and was closed.


I didn’t think that my experiences with my fear of heights are unusual or even all that interesting, until this morning when I was hiking Thumb Butte with my family.  We decided to hike all the way to the top, up the last section to the top of the rocks that give the mountain its name.  There’s a short spur that goes up to the top, leaving the loop that we usually take.  We usually don’t have the opportunity to climb it since the spur trail is closed half the year to protect nesting peregrine falcons.


But I was thinking about fear, my fear of heights and falling specifically, as my daughters struggled up the one tricky spot, a steep slide of sorts made slick by centuries of rainwater.  It’s not technical in any way, but it does require some serious faith in your fingertips’ ability to hang on while you pull up the rest of your body.  I could hear my own voice in their pleading with Dan to not let them fall, but as always, he provided them with support and encouraging words.  Then, somehow, they scrambled up the rest of the way.  And although Dan offered me help, I found myself not needing it.   Today I avoided that damsel-in-distress mode I’ve used on him many times on this particular hike and others.  And while I’ve been on many hikes and pushed myself, especially at Soap Creek in the Canyon, I’ve always had that fearful image playing out in my head.  But today, I didn’t.


When did that happen, I wondered?  When did I lose that fear?  Because it seems that fear is there, creeping out from the dark recesses of the mind when we least want it to.  Until, somehow, it isn’t.  And that’s the thing, isn’t it?  With fear, most of the time we can pinpoint its beginning:  a scary moment that kicked us right in the gut, which then reappears over and over.  Perhaps the conquering of it just takes time and baby steps until we realize, with a start, that it’s gone.  And yet, when we require ourselves to face it, to look fear right in the eyes, and continue on in spite of it, what we develop is courage.  And while it’s not truly courageous to scale a smallish mountain, it does requires something from a momma to watch her daughters push their own limits.


And so, we found a place to sit, perched upon the basalt spires with a view of our house on a hill off in the distance.   A breeze picked up, but instead of feeling like it was pushing me to the edge of the precipice, it was cool and comforting.  Piles of ladybugs were gathered in the crevices, one of my favorite signs of late summer, and my younger daughter is still child enough to be fascinated with letting them crawl on her hands.  Surveying the landscape below, vibrant green from summer storms, we shared snacks and water and watched the clouds bloom with potential. 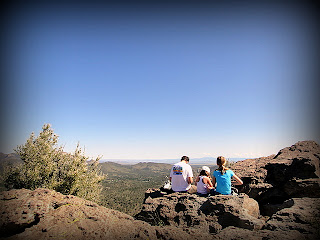 Posted by Cathleen Cherry at 7:03 PM No comments: 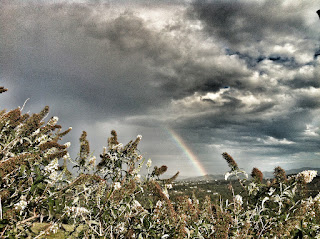 [ this moment ] - A Friday ritual. A single photo - no words - capturing a moment from the week. A simple, special, extraordinary moment. A moment I want to pause, savor and remember. (Homage to Soule Mama)
Posted by Cathleen Cherry at 5:47 AM No comments: 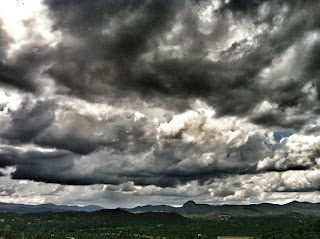 [ this moment ] - A Friday ritual. A single photo - no words - capturing a moment from the week. A simple, special, extraordinary moment. A moment I want to pause, savor and remember. (Homage to Soule Mama)
Posted by Cathleen Cherry at 12:47 PM No comments: 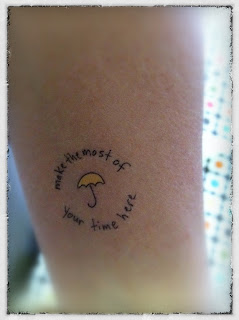 [ this moment ] - A Friday ritual. A single photo - no words - capturing a moment from the week. A simple, special, extraordinary moment. A moment I want to pause, savor and remember. (Homage to Soule Mama)
Posted by Cathleen Cherry at 4:00 AM No comments:

I ran this morning,
the long run down to the ranch and back.
As the percussion of foot and breath
found rhythm, I thought of you,
sleeping still.


And I wanted to share with you
the vaporous scent of the cliff rose,
a hint of essence:  like perfume applied
by a woman with restraint,
the scent equivalent of a glance,
fleeting, sweet, muted
by the morning’s cool August air.
Later, the heat of afternoon
will give the scent a sleepy weight,
luring insects to its nectar.


I wanted to point out to you
the inky silhouettes of ponderosa,
black needles and cones defined against
the rosy blue backdrop of the pre-dawn hour.

As I approached the meadow near the ranch,
I noted the varieties of grasses growing tall and wild
along the road, shoots boosted from summer rains,
briefly green.  You, I thought, would prefer the shade
just this side of chartreuse, that side of lime.


But I won’t share any of this with you,
greedy to have these transient August mornings to myself.
Because I know, if you were here,
I would notice none of this, absorbed in words shared,
the daily catalog of chores and events
distracting us from the perceptions of a silent waking mind.
And so, I tiptoed away from the bed, seeking solace and solitude,
solidarity with the birds who serenade me as I pass,
a daybreak parade of one.
Posted by Cathleen Cherry at 1:56 PM No comments: 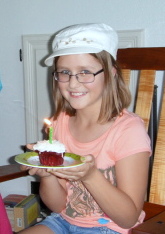 [ this moment ] - A Friday ritual. A single photo - no words - capturing a moment from the week. A simple, special, extraordinary moment. A moment I want to pause, savor and remember. (Homage to Soule Mama)
Posted by Cathleen Cherry at 3:30 AM No comments: