You awake in the fog of after
which obscures all that was before.
It’s palpable, like sheets


binding you to a nightmare.
You are flung into a stifling, scratchy
grey, suffocating from a lack


of space, an abrupt knowledge
of finite.  It is too much.  You form the words
but they emerge like sounds on a slow


reel, heavy bubbles popping
under their own mass.  Disoriented, tossed
about, you are throttled again


again again toward fear’s maw
from each crest and trough.  You flail,
turning, driven below and forced


to the surface where you gasp.
But then you hear other words, another
voice that is within but isn’t either.


You cannot float if you are struggling.

And so you release, you give
yourself up, not down, and you let yourself
be carried.  It is then that you begin

to focus, to see the hint of light that
did not yet exist in that moment before night
ends and something else begins.


You watch, in awe, as dawn streaks
the sky with color, a steady warp from east to west
and you realize you are no longer adrift


or alone, but buoyed by a love that
surges like a wave, carrying you back to shore, no
longer ensnared.  Your feet touch


soft sand, terra firma, and you step
forward to greet the day with the quiet
hope that only dawn can bring.
Posted by Cathleen Cherry at 12:00 AM 2 comments:

Yesterday morning, even though the temperature was just above freezing and there was a heavy dusting of snow, I set off on a hike through the forest at the end of my street.  There’s a trail there, and a gate, for which I can thank some enterprising neighbors.  I’ve hiked this trail often.


All summer I was here, sometimes hiking, sometimes running.  There’s a web of trails and it’s possible to go quite a long way.  I spent most of my time in those warm months, though, on a loop trail that goes up to a saddle (from where, on a clear day, you can see all the way to the San Francisco Peaks) and continues above a small valley, then heads steeply south, crossing a usually dry creek twice before heading back uphill and connecting with itself.  It’s a nice trail through piñon and juniper, manzanita and scrub oak, and it’s rare to encounter anyone else on the three-mile loop, except perhaps one of my neighbors.


This morning, though, I was in a bad mood because of some distressing news.  It’s been cold here and I’ve had a touch of cabin fever this winter break, as storm after storm has moved across northern Arizona.  I knew that a key to my feeling better would be to get outdoors, in spite of the weather, or maybe because of it.  I wanted to be alone, not to have to bother making nice conversation with anyone.    And so I was a little disappointed to notice footprints in the snow - one of my neighbors, perhaps, already heading out on the trail.  The prints only led in one direction, so I knew that he was still out there.  I wondered and worried a bit that we’d each infringe upon the other’s solitude.  At any rate, I followed these footprints through the gate, through the night’s snowfall.  Here and there other tracks - rabbit, deer, maybe skunk - crossed or briefly followed the trail.  It was so quiet, the way it only is when snow muffles all.


When I arrived at the first junction, where the trail heads south, I paused.  My neighbor’s prints followed my usual route.  I scanned that trail but couldn’t see any other sign of someone on that path.  Straight ahead of me, to the west, another trail stretched far, covered in a thin layer of snow unmarred and pristine.  A voice beckoned, “Go further,” and so I did, lines of Frost tumbling in my mind.  I reached another gate, and still the voice urged me to go on.  I rattled the slightly frozen latch and opened it, crested another saddle and felt my breath catch as I caught a glimpse of the view to the northwest.  Granite Mountain was shrouded in heavy grey clouds and snow.  Briefly the clouds lifted, and then a shaft of light broke through and lit up an area at the base of the mountain.  It is a beautiful mountain, even under the most ordinary of circumstances.  But on that morning, with the light striking it just so, with the clouds surrounding it, the mountain was extraordinary. 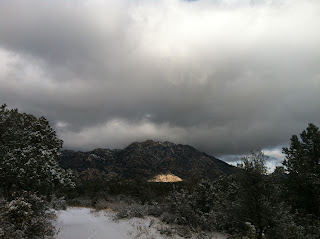 I hiked on a while before turning back, having found the peace and solitude I was seeking, along with something else that I couldn’t quite name.  In some places the snow had melted on the trail, obliterating my neighbor’s footprints and my own.  I thought of how, if I’d waited until later, I wouldn’t have seen the other set of footprints, and I wouldn’t have ventured down the other path.  I wouldn’t have even known that I’d missed something unmistakably significant in the reward of going further, down the path less traveled.  And I couldn’t help but wonder if there was a message there for me, on the last day of the old year, about what rewards might be revealed in the new year, simply by going further.

Posted by Cathleen Cherry at 9:00 AM No comments: