An Unexpected Gift in Port Orford

You never know what you might find when you open the door to an antique store.  It’s usually pretty fun to poke around inside one, to see if you might find a treasure or perhaps reignite a memory (Now on sale:  relics from your childhood!).  Whenever we travel, we always like to check out an antique store or two, and maybe add something to one of Dan’s collections (his latest obsession is fountain pens) or find something unique or unusual.  A trip to an antique store is always more interesting to us than the local tourist-trap tchotchke shop.


But when Dan and I opened the door to an antique store / art gallery in Port Orford, Oregon last week, we never expected to encounter a jamming fiddler and guitarist.  We listened as they finished up their song and then I went out to the car to retrieve the girls.  They were tired from our hike up Humbug Mountain and were more interested in the games on their iPods than a boring-to-them antique store.  I explained that they should hear the musicians in the shop and they agreed to come inside.


When we entered, I introduced Madeleine to them as our fiddle player.  Their eyes lit up to see a young fiddler and they started asking her what tunes she knew how to play.  The guitarist found a fiddle for her to play and tuned it and handed it to her.  She took it, somewhat reluctantly, and they soon agreed upon a song to play.


They let her take the lead, the guitarist providing the rhythm and the fiddler playing harmony to her melody.  They played three songs together and Madeleine, my introverted daughter, was so much more comfortable playing music rather than speaking, as usual.  To hear these strangers playing beautiful music with my daughter, with the difference in their ages at least two generations and barely a dozen sentences exchanged between them was a lovely experience.


Madeleine has had the wonderful opportunity the past year to learn music from a teacher and musician who is able to teach her traditional Celtic and American tunes in such a way that she doesn’t need the music in front of her in order to play it.  For her to use her instrument to speak so beautifully to all of us who are fortunate enough to get to listen is such a gift and seems to suit her old soul perfectly.  And like many treasures one might find in an antique store, this was definitely one-of-a-kind. 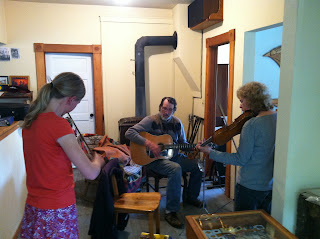 Posted by Cathleen Cherry at 9:12 PM No comments:

I recently attended a writing workshop where Cheryl Strayed was the featured speaker.  She is a woman my age and a beautiful, wise, eloquent soul.  The focus of one segment was a talk she gave on the need to surrender to your own mediocrity.  At first glance, this probably seems like an insulting thing to say to a paying audience, don’t you think?


What we can learn from this, though, as humans, is that we are not always going to do something well.  But we need to do it anyway.  Writers know this - it is why we expect to write many drafts of the same story, poem, or whatever.  By allowing the mediocre draft to appear, word by painstakingly written word, we can then begin to excise, and eventually to reveal, with some measure of grace and graciousness, something at least a notch or two above mediocre.  But without first surrendering to the mediocrity, we have nothing to work with.  It’s a process.


We can know this and yet still refuse to believe it.  For example, for years I wanted to be a crafter:  beading, jewelry making, crochet, knitting, sewing, card making, etc.  I would gather my materials, follow the pattern, and attempt a project.  And at some point, without fail, I would become frustrated and disappointed with my results.  I was a beginner, usually a true beginner, and yet I was constantly comparing my (un)finished project to one of Martha Stewart’s.  I refused, absolutely and unequivocally, to surrender to my own mediocrity.  I didn’t want to actually be bothered by the process and the practice.


I see this now.  But it was a long, drawn-out realization.  There is much about this life like this.  And one of the great and liberating wonders about this modern life is that we have the choice to surrender to a mediocrity of our own choosing.  You don’t have to adhere to generations of your family’s interests or your culture’s traditions if those don’t appeal to you.  (And perhaps there’s a sadness in that, but that’s a story for another day.)  I have chosen to surrender to writing.  Will I ever become a #1 New York Times Bestselling Author like Cheryl?  Pretty doubtful, but I will continue, as she urged all of us at the conference, to bow before the word.  The words I write are insignificant, but as Gandhi said, “Whatever you do will be insignificant, but it is very important that you do it.”
Posted by Cathleen Cherry at 7:58 PM No comments: