The Spirit of West Fork

The West Fork of Oak Creek is burning, Dan tells me, though perhaps the fire jumped over the canyon and spared it.  But I picture charcoal on sandstone.  The maples, barely leafed out this spring, no longer permitting the sun to admire their green hands held parallel to this earth.  Those golden cliffs, smudged with smoke, blackened timber floating in the fouled water.  How many times have I chosen to spend my birthday weekend there, among the falling autumn leaves?  West Fork is one of the most lovely places in this state, holding its own even when compared to the Grand Canyon or the lush Sonoran desert.

I can’t sleep, worrying how much of it has burned.  The trees will come back, I tell myself.  Having just hiked through the Granite Mountain Wilderness, which burned last summer, I’ve seen the evidence of nature’s regenerative strengths first hand.  The wildflowers carpeting the burned areas there were breathtaking.  It would take decades, though, for the West Fork to be restored, perhaps longer than my endless numbered days.

One summer about twenty years ago, I hiked the length of the West Fork with Dan and Mike.  Judy shuttled us into the wilderness high above the canyon, through a maze of forest service roads so tangled I fretted that she might not find her way out alone.  We’d see her again three days later, meeting up with her and Rachel and Steve, who would hike upstream toward us.  The canyon was our trail and we set off downstream, happy to be on our feet and done with the jostling four-wheel-drive ride. 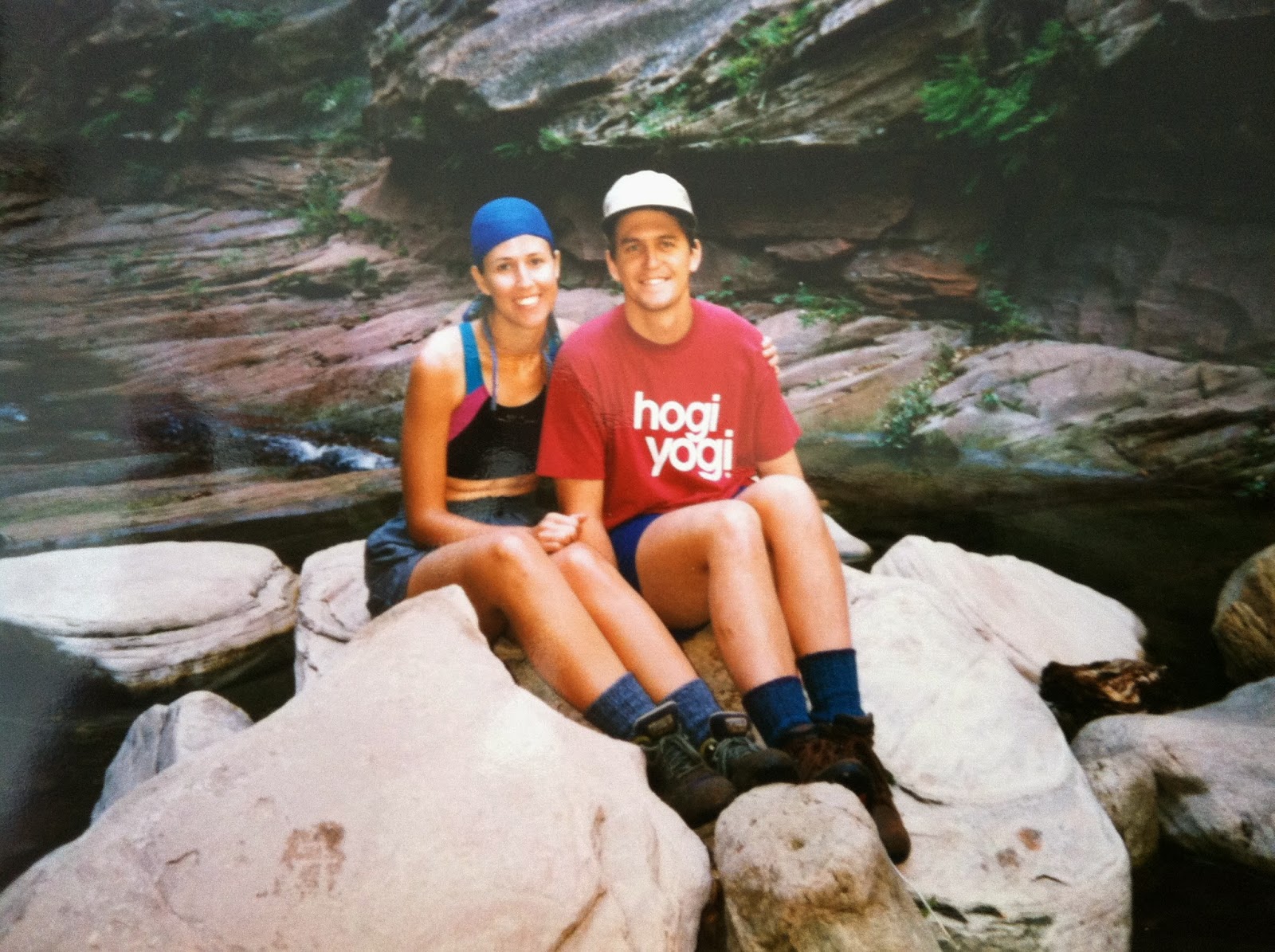 We’d have to ford a couple of long, deep pools, Mike had cautioned.  When we came to the first, he sat cross-legged on the sandstone and unrolled an ancient pool raft.  Calmly and deliberately, he blew, coaxing the raft into shape.  When it was ready, he and Dan lowered it into the pool and placed one of our backpacks on it.  They hung on either side of the heavy load, like pallbearers, and floated it across the pool.  They paddled across like dogs, keeping their grip on the pack-raft and their eyes on the goal of dry gear, and then returned for the next one.  The dark pools were framed by steep canyon walls that blocked out the sun’s warming rays.     The water was so cold it was a struggle to breathe.  It felt as if the cold squeezed all the breath out of me.  Even though it was July, I shivered uncontrollably after I’d crossed, my teeth chattering loud enough to rouse the spirits from the walls.  There were three pools we had to traverse that first day in this manner. 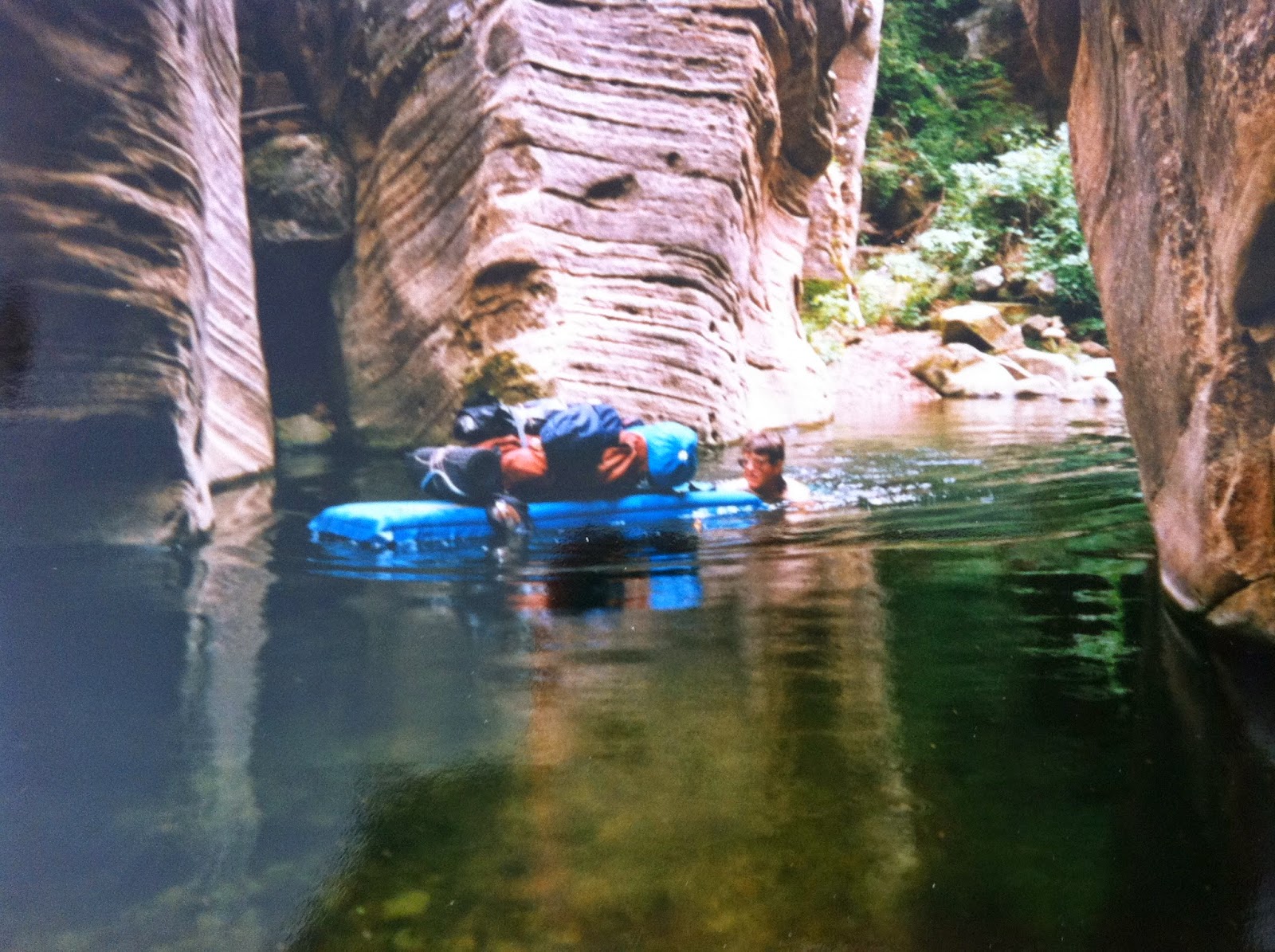 After the last one, we were cold and soaked again, but our gear was still dry, thanks to Mike’s raft.  A flask of scotch was revealed, a nip to warm us.  I took a swig but still trembled, the only warmth travelling straight from my mouth to my belly.  I turned to hoist my pack, hoping that moving towards that night’s camp would warm me.  I took one step and found myself flung hard against the cold sandstone.  The scotch, the slippery algae, fatigue – any number of reasons might explain why I’d tripped.  I sported a few rock kisses, but was fine.

We were alone there in that remote end of the canyon, as few people venture on the back roads, choosing instead to park at the trailhead just off the highway where the West Fork meets the main creek.  I don’t remember coming across anyone else that first day.  By the time we met back up with Judy and Rachel and Steve, though, we’d encountered throngs of visitors who congregated from the other end of the canyon into this exceptional place.  We spent one last night in the canyon, playing cribbage by lamp light and watching the mice scamper into our camp looking for crumbs.  The next morning, we’d head home.  By then it would be raining, and we’d be cold and wet again, and somewhat miserable to be heading back to our jobs and life in the city.  For now, though, we continued downstream, cold and wet, but in high spirits, our laughter echoing within those canyon walls. 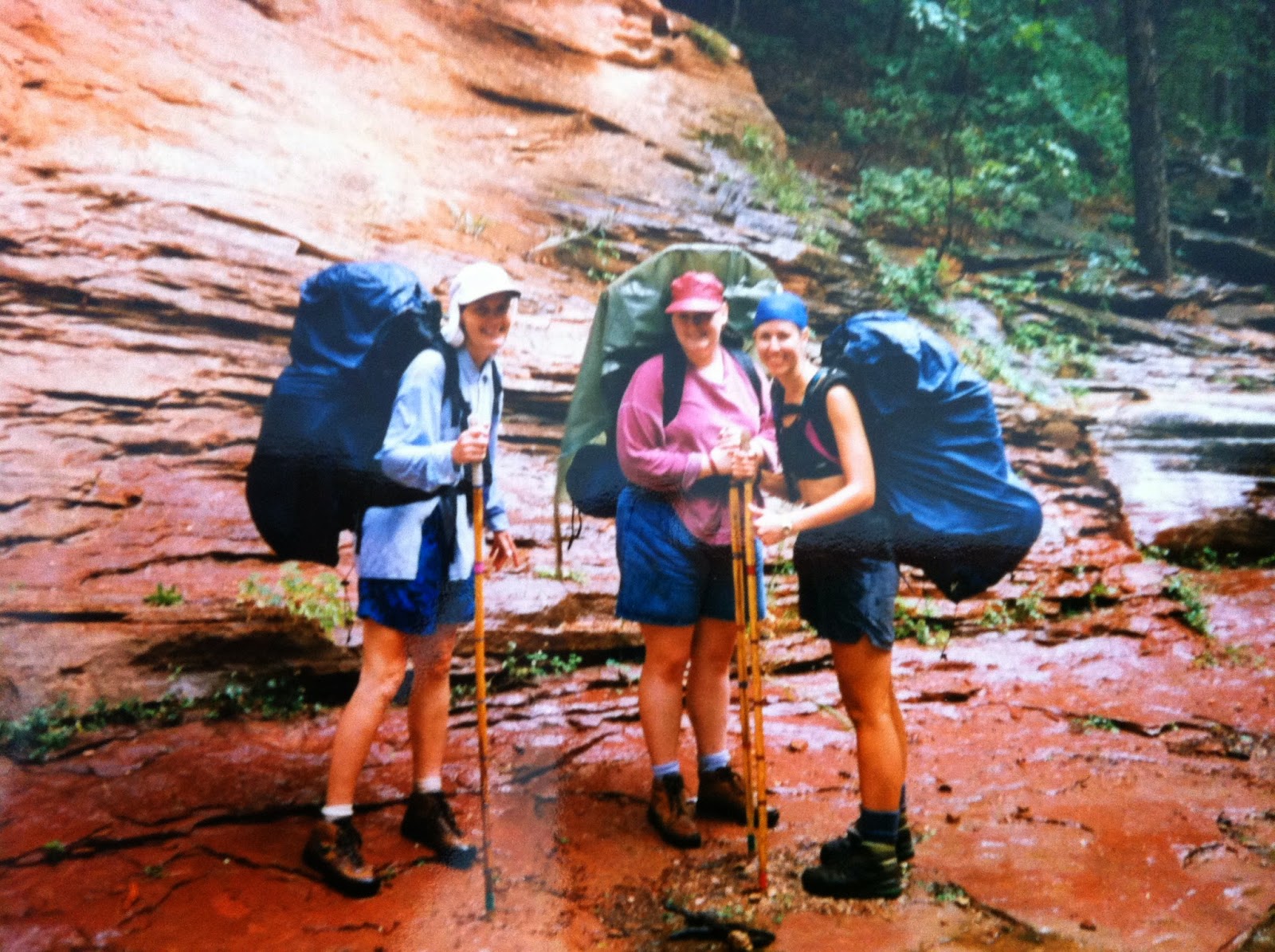 Posted by Cathleen Cherry at 12:39 PM No comments:

The Queen of Tamales

My father drives up to Dick and Eva’s little house, nestled in the grassy oak-studded hills.  Here, already, my memory grows hazy, if it serves at all.  It’s just me and my parents in the truck.  This is perplexing, as I can’t recall why I would be in Sonoita with my parents but without my siblings.  I remember myself as college-aged.  The sequence of memory here is almost dream-like, and just as in a dream, I’ll follow the thread as far as it takes me. Other trucks are parked in the grass and an ugly ranch dog comes up to inspect and greet us as we disembark.

Dick and Eva used to live on the Crown C Ranch where he was the head ranch hand for decades.  Granny Jane was one of several dear friends of my long-deceased paternal grandparents and she owned the ranch in these borderlands.  We visited her often, as if she were our grandmother.  Our times there are among my favorite childhood memories: playing outdoors, riding horses, gathering acorns, and building a fort in the dry wash in front of the huge main house.  I remember Dick as quiet and warm, with crinkly eyes that sparkled from under his big cowboy hat, and huge strong hands, gained from a life of working outdoors.  He never spoke to me much, but was a legend to us kids, as he’d survived a lightning strike that killed his horse.  Eva was something else altogether, slim and sharp-tongued, and not afraid of calling us kids on our shit when we crossed the line.  Hers was tough love before that was a term people used.  As a child, I was terrified of her, even though I knew she meant well.

But I return to the dream-like memory, as an aproned woman opens the door to Eva’s tiny house and bids us to enter.  I don’t recognize her, but she knows us, including my name, and squeezes each of us as we enter the house, embracing us in quick warm hugs, her face flushed bright.  It dawns on me later that this is Mercy, short for Mercedes, Eva’s daughter.  There are several other women here in the kitchen-living room, and it’s noisy and too warm and smells delicious.  I spot Eva at the stove, stirring a huge pot and casting orders in her unique mix of Spanish and English.  She sees us and comes to say hello, spoon in hand.  She hugs my dad first, because he’s her favorite, of course, kissing him on the cheek and joking with him about something I can’t hear.  He’s known her for much of his life and looks like a boy in the beam of light that her face shines upon his.  She hugs my mom and then says to me, pointing the wooden spoon, “I hear you no doing good.  You need more study.” She always reserved her tenderness for my dad and her smiles and jokes for my brother Colin.  The rest of us, it felt, did not live up to the expectations of this ad hoc tia of ours, who loved our dad so.  But she takes my hand and pulls me to the stove.

It’s a cast iron wood stove in my memory, the kind I imagine the pioneers might have used.  But it’s what Eva prefers, even here in her new modern house with a real shingle roof.  They moved here after Granny Jane died and the ranch was sold.  It’s a much nicer house than the tin-roofed house they lived in when I was a kid, but she didn’t want an electric or gas stove.  This is the kind of stove she knows.

But here, now, I am her focus:  the gringa girl.  No introductions are made because they all know me, or did when I was a little girl and came to the ranch for Easter and lazy summer visits.  I’m bewildered and it doesn’t occur to anyone that I don’t know the names of the other women.  But I am folded into the group and assigned a task that I’m not sure I can do since I don’t understand the mostly-Spanish language that’s floating around the room.  Everyone talks at once and although it appears that each of the women is giving orders, Eva is definitely in charge.  They are making tamales, more tamales than I can fathom.

Eva is mixing the masa in the largest pot I have ever seen.  It’s almost a caldron, really.  In another large pot, corn husks are bathing in steam until they’re pliable and soft.  I can’t even recall now if the tamales were green corn and green chile, or pork or beef with olives.  But I remember this.  I stand, sweating and watching the skilled hands of many women work quickly and gracefully.  Dozens of tamales are made in my presence, instructions relayed in a language I barely comprehend, but I watch and learn, slowly, folding and rolling the piping hot corn husks as my fingers are burn-numbed again and again.  It’s like watching Baryshnikov dance and then trying to imitate his elegance.  My tamales are lumpy and misshapen compared to the ordered rows the other women make.

We work and work, the women squawking and laughing, this small army creating more tamales than I’ve seen in my entire life.  They’ll share them with friends and family, eat them at Christmas and throughout the winter.  The tamales are everywhere, in the pans, bags, and boxes lining counters.  Again and again, the masa is spread on the husk, the topping daubed on.  One end of the husk is folded against the masa and then the entire creation is rolled and placed in the steamer.  Finally, even Eva herself is exhausted, although her eyes are still bright and she’s still barking orders.  She lowers herself in a creaky kitchen chair, holding the spoon like a scepter.  My mother sits beside her, a lady-in-waiting.

In the frenzy of the kitchen, I hadn’t noticed my father outside, leaning against the truck with Dick.  It is dusk now and the old ranch dog is watchful at their boots.  I am suddenly drained, the heat oppressive.  The women begin washing dishes, bagging the rest of the tamales, sweeping the floor.  I stand near an open window, the November air cold and welcome.  I wipe the pots with a soft cotton towel imprinted with the year of my birth.  I catch snippets of the conversations inside and out, but I am so tired and my hands are so scalded I have to concentrate on what I’m holding.

One by one the women leave as tasks are finished, each with grocery sacks filled with our collective labors.  Eva calls to them, “Hasta la bye-bye!” and they answer in kind.  Their trucks pull away, red taillights glowing like the cherries of cigarettes.  Eva folds me into a hug with a whisper, “You work hard.”  Is it a compliment or a command?  I let my heart decide.  She squeezes my cheek and the flint in her eyes softens. My mother and I are escorted into the darkness and we say our goodbyes.   My own bundle of tamales is warm against my belly as the truck jostles down the dirt road, the headlights illuminating grass the color of masa.
Posted by Cathleen Cherry at 6:57 AM No comments: