Granite Mountain Wilderness reopened this week, nearly three months after the Doce Fire ripped through it.  Saturday morning the four of us headed there to hike to the big alligator juniper tree; the intro bass line of REM’s Pilgrimage bumbled through my head, setting the pace.  The first two miles, out to Blair Pass, were as lovely as always.  The trail winds through a riparian area and is lush with vegetation, including a unique tree I christened the ponderoak.


As we approached Blair Pass, though, evidence of the fire was all around us.  But perhaps even more evident was the regrowth.  Scrub oak sprung from its charred selves, like hundreds of phoenixes.  Smiling wildflowers of many colors were bending with the breeze.  Bear grass shoots reached tall.  Yucca splayed out around blackened stumps just inches high.  Industrious ants scurried, preparing for what will surely be a longer winter than usual for them.  And improbably, from what was surely a dead agave, a stunted flower stalk rose in testament to Mother Nature’s resiliency.


At the pass, though, the fire had burned incredibly hot.  The manzanita thicket that adorns the wallpaper of this page has been replaced by burnt, black sticks less than a foot tall, jutting up from the damaged soil.  It was a moonscape.  The trail junction signs erected by the Forest Service had become charcoal, brittle, black, barely legible, propped against the remains of their posts.  The shadows of what remained standing on the blackened granite cast an eerie pall.  Madeleine and I rested there while Dan and Arden went in search of a small geocache he’d placed nearby in 2010.  They found it - the roll of paper within now a fragile, black cylinder of carbon.  I know the area will recover, but it will not return to the way it was during my lifetime.  This upsets me, in spite of my awareness that my emotions mean little to the wilderness.


The trail beyond the pass deteriorated significantly.  Due to the intensity of the fire and the prolonged monsoon, erosion and run-off have effectively destroyed the trail.  It was difficult picking our way through the rocky, narrowed channels, the charred underbrush whipping and scratching our legs.  At times we had to rely upon Dan’s excellent route-finding skills.  Eventually, after we’d wound our way down from the pass, we entered an area that hadn’t burned.  At one point, the trail was littered with pieces of white quartz.  Here we searched for and found the spur that led to the tree.


The tree stood as it always had:  massive and majestic.  The area to the west of it had burned, though, close enough to have singed parts of the tree’s canopy.  A small memorial made of white quartz at the base of the tree commemorated the Granite Mountain Hot Shots who’d created a fire break credited with saving the tree just over three months ago.  There’s a fantastic photo of most of the hot shots, in pyramid formation with sooty, smiling faces, dwarfed in front of the tree. 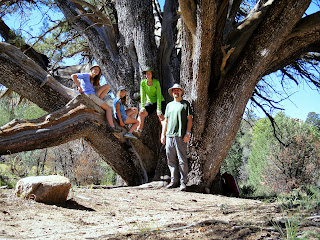 I thought of them as we climbed in the tree, but they didn’t dominate my thoughts.   Instead, as I watched my daughters climb and rest, cradled in its colossal arms, I thought of the comfort of permanence.  The tree was still there, as it had always been.  It would surely outlive me, just as it had outlived this fire and countless other hardships in the millennium since it had sprouted.  This tree, nearly geologic compared to all other life in the Granite Mountain Wilderness, was unchanged by the personal trials of our lives, unscarred by our small community’s national tragedy.  The tree was the same:  a symbol of stability and timelessness, its sacredness mere strength in the mundane monotony of life.  We scurry about our busy lives like ants, except when we make the time to pause, and breathe, and wonder.


(If you go:  from Iron Springs Road, turn at Granite Basin Road.  Park at Playa ($5 or use your federal lands pass).  Take Trail 261 to Blair Pass, then continue due west from the junction.  Be prepared for hazardous conditions beyond Blair Pass; experienced route-finding skills are necessary as the trail is dismal at best.  Two miles to Blair Pass, plus approximately 1.75 to the tree, approximately 7.5 miles round-trip.  Have a map, GPS (and know how to use it), plenty of food and water, first aid kit, and a flashlight.  Be sure someone knows where you are going.  This trail is not recommended for inexperienced hikers.  Know your limits.  Do not add to or disturb the memorial at the tree. Please leave no trace.)
Posted by Cathleen Cherry at 4:20 PM