Madeleine is in my class this year, which has caused shifts in my professional vs. personal perspectives.  But regardless of my own conversations with myself, she had homework to do for my class.  Homework for my class always involves choices.  I give my students five options and they choose two that appeal to their own interests and intelligences.  This week’s included options such as summarizing a current event in a French-speaking country, making crêpes for your family and writing up a brief report about the process, doing an online grammar activity, and more.  Madeleine chose to make crêpes.

Lately, my daughters have been becoming more and more interested in the kitchen.  Usually they want to make brownies or some kind of dessert, often from a mix.  They haven’t done much cooking from scratch.  Madeleine found a recipe and was ready to begin her project, and naturally, Arden and I gravitated to the kitchen as well.  We were going to help.  Yet, like most teenagers, Madeleine had her own independence in mind.  She kicked us both out of the kitchen.  Arden and I sulked for a bit, and then she went outside to ride her bike.  I continued to sulk, however, letting the worries pile up in my head:  what if she forgets an ingredient?  or doesn’t measure accurately?  or doesn’t understand the recipe?  Does she realize just how hot the pan needs to be?  What if she burns herself?

I fretted away while she busied herself in the kitchen.  I bit my tongue and said nothing, sitting quietly and reminding myself that (yet again) I was letting go of the bike, and that regardless of the outcome, there were lessons for both of us to learn.  Teaching a child to ride a bike is pretty much the metaphor for all things parenting.  I’d assigned my students recipes far more complicated than this one, and they’d survived, right?  Keeping quiet is often the most challenging thing a parent can do.  And perhaps because it is so difficult, it can also be very powerful – usually more powerful to the parent than the child.

Because I was forced into silence quiet, I had to listen.  And so I did.  I listened as she puttered about the kitchen, gathering her ingredients and supplies.  I listened as she left the fridge open far too long, had trouble lighting the stove, and used way too much cooking spray.  But I didn’t interfere.  I didn’t do anything until she asked for help, and even then it was the mundane task of tearing off sections of waxed paper.  I wanted to help.  I wanted to be needed.  Waxed paper?  I could do so much more than tear waxed paper!

But she didn’t need me.  She didn’t need me to do anything because she was fully prepared and ready for the task.  We never know what our kids are capable of until we give them the opportunity and power to do something on their own.  How often do we under- (or over-) estimate their abilities?  And like any complex dance, figuring out those details is the crux of parenting.  Are they ready?  Are we?

When it was time to assemble our crêpes and eat, they were perfectly golden brown and uniform.  We loaded them with fruit, Nutella, whipped cream, and more.  They were delicious, and no one had been hurt, the kitchen was still standing, and I had survived my banishment.   To be honest, her crêpes were far better than mine. 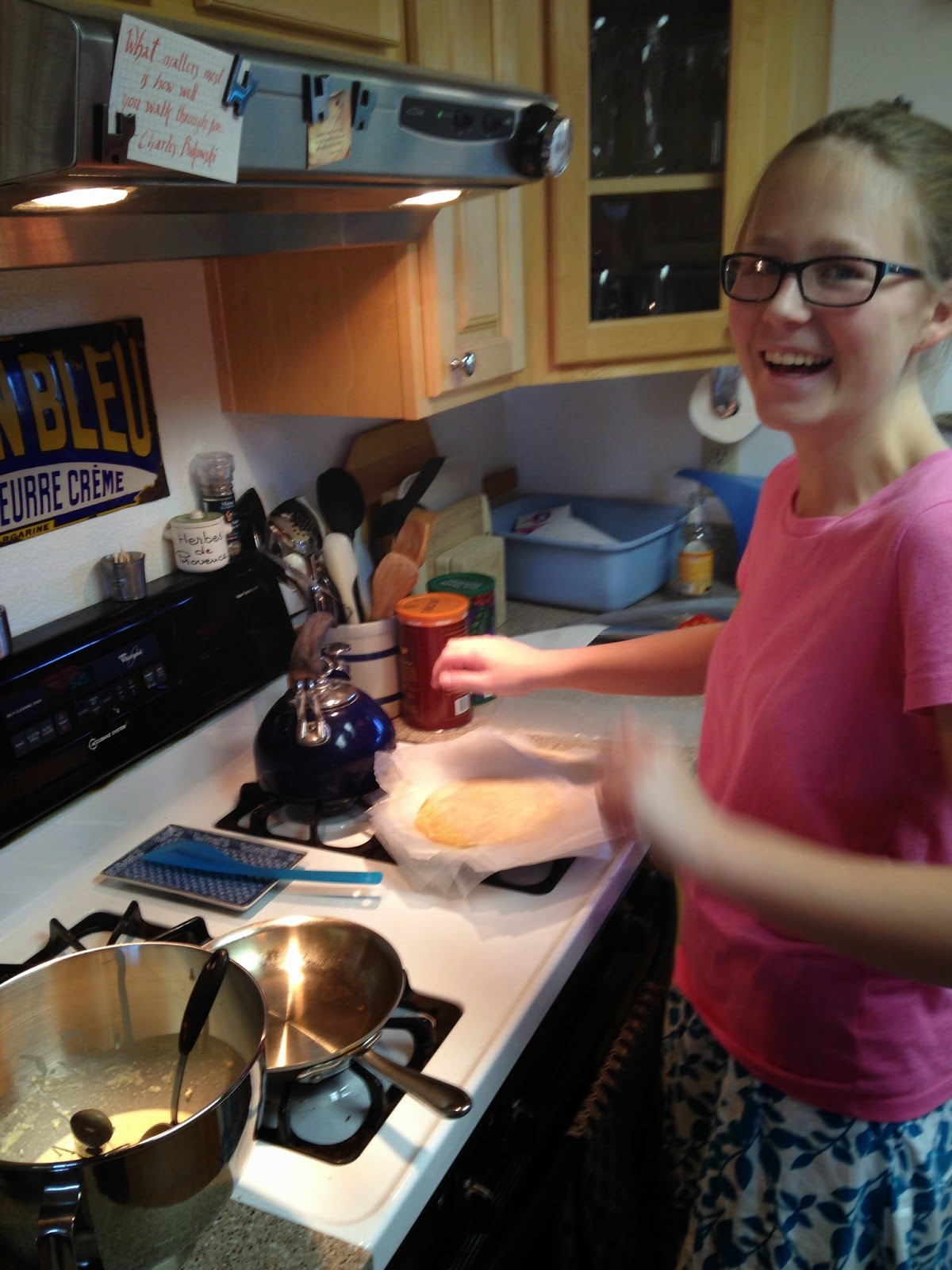 Posted by Cathleen Cherry at 9:43 AM