At breakfast this morning I was alone because Dan left last night.  My flights were arranged by the Fulbright program, and because I have an absurd history of sometimes being confused by dates while traveling, I am not on the same flight, so I am still in Lima while he's finished the first leg of his journey home.  So I brought with me to breakfast a copy of the Little Prince in español with the goal of hopefully finishing the book before my return.  I've read it many times and it's my favorite book, written by Antoine de Saint-Exupéry, Frenchman and WWII pilot.  It's a strange story of a man stranded in the Sahara where meets the title character.  Over a short period of time and despite communication barriers, the man finds himself inexplicably drawn to and responsible for the little prince.  The story is an allegory, so the literal telling is layered with symbols and situations that represent much more than is apparent.  Without spoiling it for those who haven't read it, the recurring motif is that the most precious things are hidden and it's difficult work to truly appreciate the value of friendship and connections with others.

As I was reading this morning at my table, a young waiter approached to refill my café con leche and he commented on my book, asking me in French if I were French.  I told him that I am from the United States (having learned that there is some resentment in Central and South America that those of us from the US call ourselves Americans even though everyone from North, Central, and South America are technically also Americans).

"That's my favorite book," he told me in English, and I agreed it is mine, too.  He continued that he'd read it in France while visiting his sister.  We ended up talking for a while about the book in a curious mixture of French, Spanish, and English.  And after he left, I found myself feeling pretty emotional (again) about this experience in Peru ending.

I can't wait to get home.  I miss my daughters.  I miss the lovely home we've created.  I miss Mexican food, my own bed, my own shower.  This experience has challenged me in ways I did not expect and has left me feeling humbled and grateful for many things that are difficult to communicate.

I came to Peru with three guiding questions to help me narrow the focus my attention:
What opportunities exist for bilingual education?
What languages are taught?
Are indigenous languages taught elsewhere in Peru?

After my school visits in Tarma, I felt that while there are mandates from the national curriculum that English be taught in every school, there are often no real opportunities for students to truly acquire English in regular public schools.  These students often have only about 90 minutes of English a week.  If they are lucky, they have a teacher like Clever who is quite proficient in English, having spent time in a Fulbright program in Montana as well as having had an educational opportunity in England.  (Students at COAR schools in Peru, which many of my Fulbright colleagues visited, have English class daily.  These schools are public but students are admitted by application only - high test scores and a satisfactory psychological test are required to attend these boarding schools.) However, many of the English teachers we met and worked with in the Tarma area struggled with their own English skills.  They lacked confidence about their ability to speak and teach it, but they were definitely committed to doing their best, coming to workshops my co-teacher and I hosted for them.  I did not find the answers to my other two guiding questions in Tarma, but answers would reveal themselves later in this journey - just as in the Little Prince, they were not easily visible.

Dan met up with me at the end of my Fulbright program and we flew to Cuzco for a guided trek and visits to Inca ruins.  I still had yet to hear anyone speaking Quechua, the indigenous language of many people living in the Highlands, but I'd found in Lima a copy of the Little Prince in Quechua.  I bought it because I apparently have started to collect this book (with this copy I now have it in four languages) and also because we had been learning from workshops that resources in Quechua are limited.  I wanted to support the translation efforts.  The lack of resources printed in Quechua reminded me of similar issues on the reservations in Arizona, where Native Americans don't have resources printed in their indigenous languages, like Navajo. 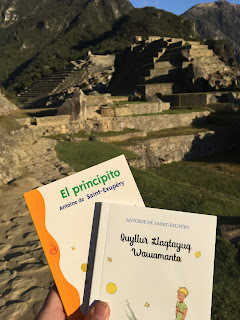 It wasn't until we were in the van driving to the trailhead for our Choquequirao trek, with my Quechua copy of the Little Prince stowed in my luggage left in storage at the hotel, that I finally heard Quechua.  In the backseat of the van were three men who were accompanying us on our trek as cooks and an assistant guide, and they were speaking to one another in Quechua.  It appeared that Milton, the assistant guide, was telling stories and the two other men would laugh and comment - this went on during the entire drive, a long story punctuated by laughter and a short commentary, and then Milton would begin a new one.  Quechua sounds like no other language I have ever heard.  I was finally hearing the language of the Incas.

Over the next few days, I learned that in Cuzco and some other areas, many schools do teach Quechua, alongside English and Spanish.  Our guide's daughters, who have Quechua names, were learning Quechua in school.  William, our guide, learned Quechua from the assistant guide, cooks, and horsemen, as they worked together on the Inca Trail and other treks.  It was also heartening to see street names, restaurants, and more with Quechua names in Cuzco.  Spanish is definitely the predominant language, but it was good to see that the indigenous language has such a presence in the city.  In Plaza de Armas, the main square, there is a statue of Pachacuti, the Inca who united the empire.  I was expecting Francisco Pizarro, the leader of the Conquest of Peru, much like you'll find statues of Confederate leaders in the Southern US.  It was a pleasant surprise not to see the Spanish Conquistadors, whose greed was so brutal and so violent, held up as heroes.

In a roundabout way, I found the answers to my guiding questions and learned a most important word in Quechua:  solpayki (thank you).  On our trek, which was more challenging than anticipated, I woke up on the third day with a fever and sore throat.  My second visit to the ruins of Choquequirao was out of the question as I shivered in my sleeping bag trying to warm my aching bones.  When I felt a little better, I set off with Milton to hike down to that night's camp, while Dan and William returned up the mountain to Choquequirao.  Milton was obviously concerned about me, and while I felt better, I was still feeling weak as we hiked.  He and I had bonded earlier, after realizing that we are both fifty years old.  We spoke in Spanish about basic topics, like family and the weather, to pass the kilometers, and I thought about the narrator and the little prince and their communication difficulties, being a traveler in another land, and the challenges faced by the people in the communities were passed through.  These were agricultural people, living on small plots and farming corn, potatoes, and quinoa; raising pigs, sheep, and chickens.  They plowed their fields with a horse or a mule and used hand tools.  Their homes are small adobe dwellings of one or maybe two rooms, and they rent campsites to people like us for extra income.  It was a bit like time travel, but some places had electricity from solar panels and some even advertised wifi.  Dan and William caught up with us at our lunch break and I felt somewhat better that evening.

Before I came to Peru, I did not have an idea of how diverse this country is in terms of geography, climates, people, languages, and experiences.  Lima is so different from the rest of the country, and yet Lima itself is not easily quantifiable either.  I did not understand what poverty truly looks like, and how lack of infrastructure impacts daily life.  I did not comprehend the effects of corruption and how that plays out in the lives of regular people.  I could not fathom the depth of patriotic pride that nearly all Peruvians demonstrate, wearing ribbons and pins of the national colors or the jerseys of the national soccer team.  I am astounded at the busy activity everywhere in Peru.  There are people everywhere, at all hours, buying, selling, cleaning, building, walking.  Even in Tarma, which I imagined as a sleepy mountain town, there is a bustling energy even on Sunday evenings.  I have been so surprised at the warm welcome I have received wherever I go:  handshakes, kisses on the cheek, buenos días from person after person every morning and buenas noches every night.  I have wondered at the reception a Peruvian might receive in the US.  I intend to continue working remotely with the English teachers in the Tarma area, and to share with my students how similar they are to Peruvian students:  a love of pizza, deep pride in identity, a polarizing view of K-Pop (are you a lover or a hater?), an insatiable need to take selfies, and a desire to learn more about the world.

I hope that I have been a gracious guest and I am anxious to take the lessons I am still learning home with me.  I do not know if I will ever return to Peru, but I am so grateful for all of my experiences here, especially the ones that were challenging and difficult.  Perhaps Anthony Bourdain said it best:


“Travel isn’t always pretty. It isn’t always comfortable. Sometimes it hurts, it even breaks your heart. But that’s okay. The journey changes you; it should change you. It leaves marks on your memory, on your consciousness, on your heart, and on your body. You take something with you. Hopefully, you leave something good behind.” 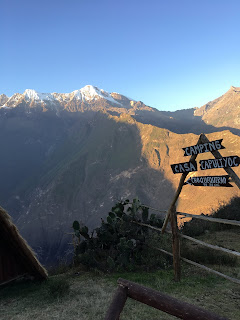 On the last night of our Choquequirao trek, we stayed in a rustic cabin in Capuliyoc, the literal end of a very narrow and bumpy road.  Looming across the valley was the glaciated peak of Padriyoc - perhaps 19,000 feet at its summit.  After dark, William pointed out constellations in the Inca system, like Yacana - a mother llama with her suckling baby -  as well as the Southern Cross.  The Southern Cross has been used by navigators for centuries, and I was again reminded of our insignificance on this tiny planet in a vast and expanding universe, yet I did not feel unsettled by it. Rather, I was comforted by this distant symbol and its importance across the ages to people traveling and thinking of home.

Posted by Cathleen Cherry at 10:33 AM