This evening as I sit to write this post I am amazed that I have been in Lima for just over twelve hours.  Most of my group arrived via Miami this morning after an overnight flight.  It's been an exhausting day but also so wonderful to see our fantastic Peru Crew once again after meeting in Washington DC this winter.  Our hotel is in Miraflores which is an upscale neighborhood right on the coast.  From my room I have a great view to the west of the ocean, however, due to the hazy, foggy quality of the air, it's not easy to determine where the sky ends and the ocean begins. 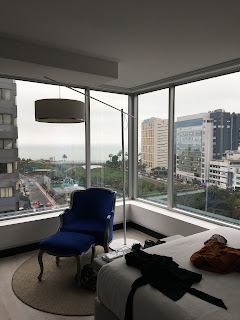 And that's definitely not a complaint, just an observation I have coming from a dry climate where we enjoy blue skies most days of the year.  I spent the morning relaxing and organizing and getting my bearings as I know that the next several weeks will be at a very intense pace.

Our first event today was a delicious lunch at our hotel followed by an interesting presentation and Q&A with Violetta, a Peruvian Fulbright based in Lima.  She gave us a brief overview of history and culture of Peru and was very willing to answer our questions and discuss similarities and differences between US and Peruvian customs, social issues, and education.

The afternoon and evening was spent driving through various neighborhoods in Lima and a walking tour of the historic district. 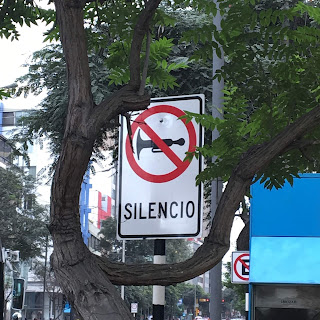 One of my favorite signs in the neighborhood.  Lots of honking of car horns in Lima. 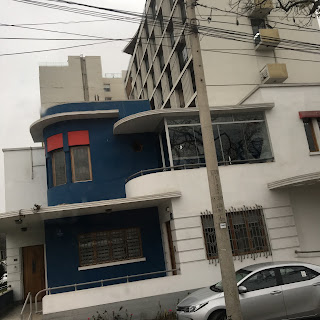 There is a wide variety of architectural styles in Lima, including this art deco residence. 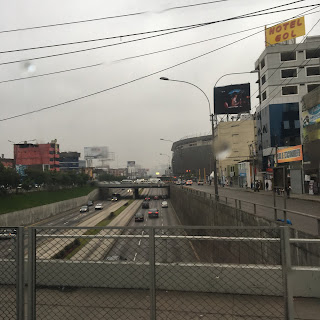 Crossing an overpass.  This expressway is surprisingly empty of cars compared to other streets we drove on today. 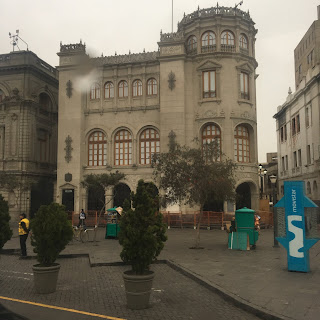 Another example of architectural style from closer to the historic district.  The blue structure with white lettering is a phone booth!  I will try to get a photo of one tomorrow as I know of some younguns who have never seen one. 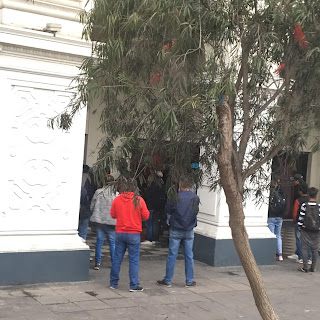 Peru played Bolivia today in soccer and at many venues there were crowds of people watching the game.  We were in the Plaza de Armas when Peru scored a goal and on all sides of the plaza cheers erupted.  Peru won 3-1. 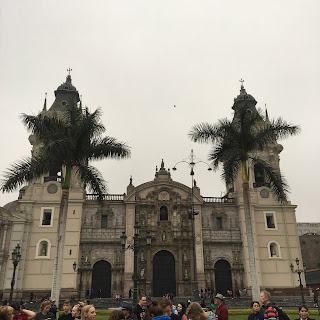 The cathedral of Lima.  Note the different architectural styles due to rebuilding after major earthquake damage.  This church faces one side of the square, the presidential palace another, and the city hall a third.  The fourth side is lined with commercial businesses in a colonial building.  There was a heavy police presence here with riot shields and helmets, which our guide says is typical.  There are no demonstrations permitted within the square. 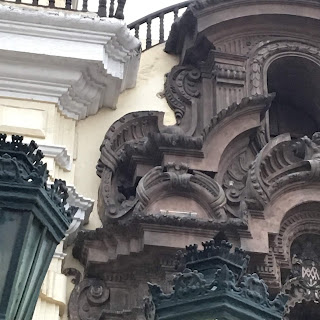 Details from the church of San Francisco.  Can you spy the adventurous gato? 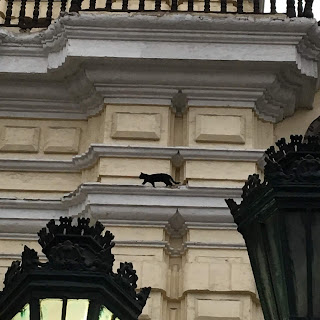 Here is the gato, strolling along the cornice waaaaay up high, on the church of San Francisco.  Inside the grounds of this church are a working monastery with a beautiful and peaceful cloister, artwork from as early as the 1700s, and the catacombs of Lima, where thousands of (rich and connected) people were buried over the past few centuries.  Unfortunately no photos were permitted inside, but here is a peek. 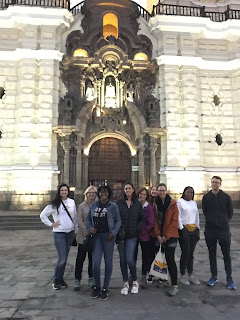 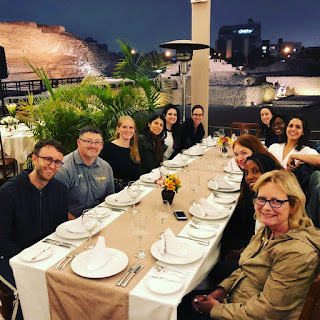 We ended our evening with an amazing meal on the grounds of Huaca Pucllana, the site of a pre-Incan archaeological importance in the middle of the Miraflores district.  This site was built between 200 and 700 CE of adobe brick.  The brick is so well-preserved because it rarely rains hard in Lima and so erosion has not damaged it as much as might be an issue elsewhere.

Posted by Cathleen Cherry at 8:47 PM