Every day in Peru yields surprises, new adventures, and new foods to try.  After a great night of many consecutive hours of sleep, we set off for Tarmatambo.  This is the old city of Tarma which was settled by people prior to the Inca.  The Inca arrived, and according to our guide, peacefully assimilated these people into the Inca Empire, from whom they learned new technologies and agriculture.  We walked on the Camino Inca, a paved Inca pathway, through the ruins.  These are mostly food storage buildings high above the rest of the settlement.  Below are Inca irrigation systems, still in use by the farmers of today who are growing corn, potatoes, wheat, and many other crops.  I am amazed at the vegetation here.  It is very high in Tarma, at 10,000 feet, but Tarmatambo is even higher, maybe 12,000 feet, and yet cactus, palm trees, succulents, and bougainvillea all grow here.  There is a very unique climate zone here that allows this which I do not understand.

Agave and San Pedro cactus, which is related to peyote and has the similar hallucinogenic properties. 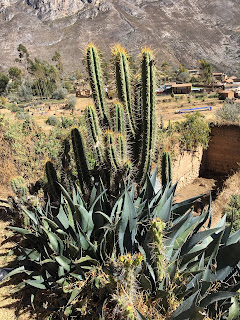 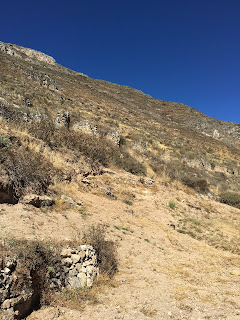 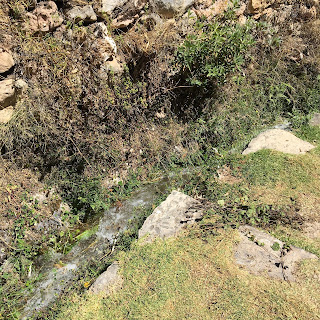 Today's new food was this fruit.  It grows in a leafy shell like a tomatillo but has a tart and refreshing flavor.  I can't remember the name, but it's something like picupi. 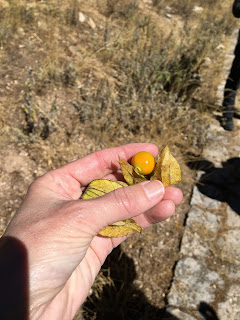 The reason we went to Tarmatambo today was to witness the Inti Raymi ceremony, a re-enactment of Inca traditions.  The Inca deities were mainly the sun, moon, mountains, and lakes.  On a large field, the first characters who entered were dressed as an Incan religious leader and the Inca's wife.  (Inca can mean both the people and their leader.)  He called forth the various groups of young people who were dressed in different colors representing the four areas of the Inca Empire.  They arrived and took position, carrying objects and offerings.  One of these was knotted yarns called quipu.  Eventually the Inca himself arrived with his entourage and the leaders of the separate groups were called forth to report to him.  The quipu yarns are essentially a record of information, and in this particular case, detailed financial reports from the different parts of the empire.  The Inca had no written language prior to the Conquest, but these quipu served as an alternative record keeping.  The ceremony continued but it was time for lunch, so we departed.  We did not witness the vicuña sacrifice that was to take place.  The Inca had only three laws, which address pretty much everything:  Do not be lazy.  Do not steal.  Do not lie.  Crime was rare and punishment was harsh.  The rainbow flag represents the Inca and is the city flag of Cuzco.  It makes a lot of sense that a people who worshipped the sun would choose a rainbow as representative of their culture.


Clever and former students of his before the ceremony posing with me and Brian. 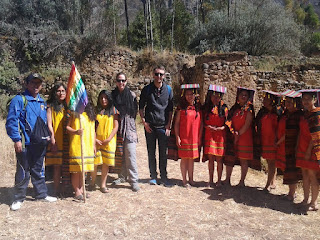 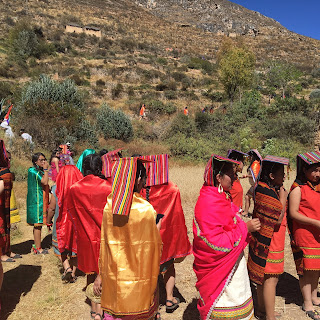 Each group wore different colors and had different symbols, like these girls whose capes have moons. 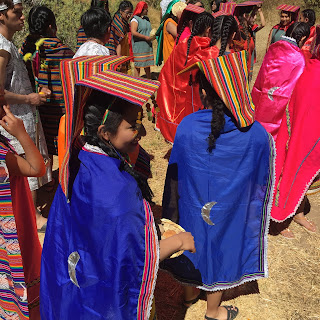 We sat under this canopy which represents the Inca. 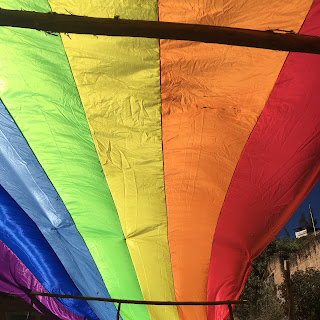 Most of the groups assembled on the field with Tarmatambo in the distance. 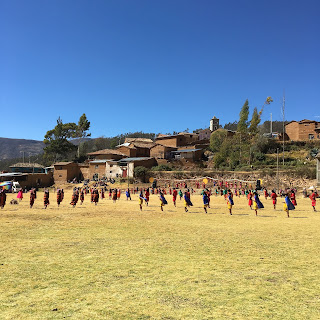 Another view of the ceremony. 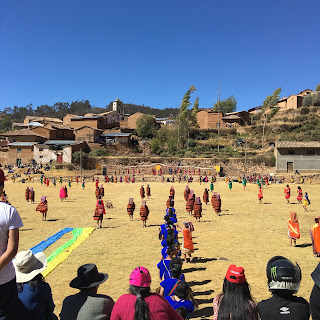 The pobrecita vicuña, smaller than an alpaca. 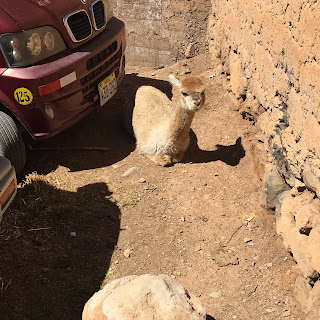 We had lunch in another area near Tarma called Muruhuay, where an image of Jesus appeared on a stone wall, first to a Spaniard and later to a shepherd boy.  It is now a place of pilgrimage and considered very holy.  We visited the church there and saw the image which is now painted and gilded.  There are springs behind the church and the water from them is considered holy.

After returning to the hotel for a bit, Brian and I ventured out into the city on our own to see if we could find our way to the school we will be at in the morning.  Like last night, people were everywhere including children skating in the park and young people dancing.  There was a procession of the religious carrying a relic and singing, with people from the residences on second floors throwing flower petals down as they approached.  The farmer's market was still open but winding down.  The dogs were eating from the garbage piled in the streets and shops were open on every street.  Even for a Sunday evening, the town was still very animated and lively.

One of the many dogs of Tarma.  All of these dogs do not really interact with humans.  It's very different from American dogs who seem to think they are part of the human pack.  We have not seen a single cat since arriving. 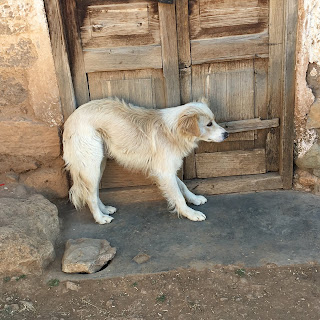 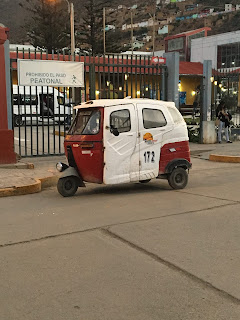 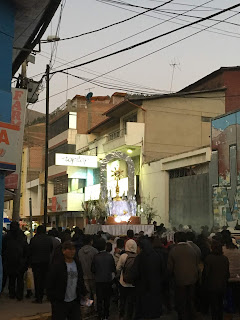 The view of Tarma from Tarmatambo: 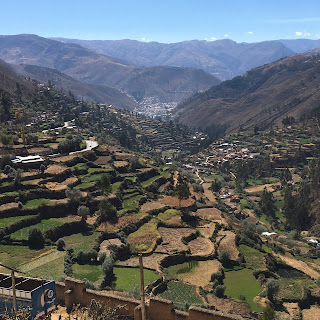 Posted by Cathleen Cherry at 8:19 PM